A comet miner chases an alien spaceship on an epic interstellar journey across millennia. 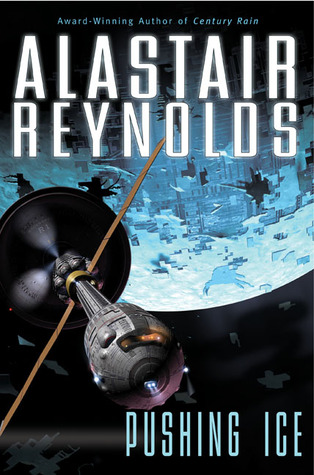 2057. Humanity has raised exploiting the solar system to an art form. Bella Lind and the crew of her nuclear-powered ship, the Rockhopper, push ice. They mine comets. And they're good at it.

The Rockhopper is nearing the end of its current mission cycle, and everyone is desperate for some much-needed R & R, when startling news arrives from Saturn: Janus, one of Saturn's ice moons, has inexplicably left its natural orbit and is now heading out of the solar system at high speed. As layers of camouflage fall away, it becomes clear that Janus was never a moon in the first place. It's some kind of machine - and it is now headed toward a fuzzily glimpsed artifact 260 light-years away. The Rockhopper is the only ship anywhere near Janus, and Bella Lind is ordered to shadow it for the few vital days before it falls forever out of reach. In accepting this mission, she sets her ship and her crew on a collision course with destiny - for Janus has more surprises in store, and not all of them are welcome.

Also by Alastair Reynolds: My reviews of House of Suns, Revelation Space, and Terminal World.

A steampunk post-apocalypse. Not even a little bit Victorian. 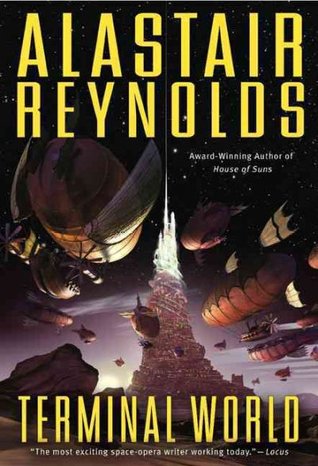 Spearpoint, the last human city, is an atmosphere-piercing spire of vast size. Clinging to its skin are the zones, a series of semi-autonomous city-states, each of which enjoys a different - and rigidly enforced - level of technology. Following an infiltration mission that went tragically wrong, Quillon has been living incognito, working as a pathologist in the district morgue.

But when a near-dead angel drops onto his dissecting table, Quillon's world is wrenched apart one more time. If Quillon is to save his life, he must leave his home and journey into the cold and hostile lands beyond Spearpoint's base, starting an exile that will take him further than he could ever imagine. But there is far more at stake than just Quillon's own survival, for the limiting technologies of the zones are determined not by governments or police but by the very nature of reality---and reality itself is showing worrying signs of instability.

Verdict: Alastair Reynolds is a writer of "highbrow" science fiction, and probably one of the best of those writing today. Terminal World was a bit of a departure from his usual space operas, being set in an almost fantasy-like post-apocalyptic world with trappings of transhumanism mixed with steampunk. I enjoyed it, but all of Reynolds's novels I've read so far read like intellectual exercises that don't quite knock it out of the park as stories.

Also by Alastair Reynolds: My reviews of House of Suns and Revelation Space.

Nine hundred thousand years ago, something annihilated the Amarantin civilization just as it was on the verge of discovering space flight. Now one scientist, Dan Sylveste, will stop at nothing to solve the Amarantin riddle before ancient history repeats itself.

With no other resources at his disposal, Sylveste forges a dangerous alliance with the cyborg crew of the starship Nostalgia for Infinity. But as he closes in on the secret, a killer closes in on him because the Amarantin were destroyed for a reason. And if that reason is uncovered, the universe - and reality itself - could be irrevocably altered.

Verdict: My overall assessment of Alastair Reynolds after two books is: great thematic science fiction, but he just hasn't won me over with his storytelling and characterization. Revelation Space is not bad, and if you like hard SF, epic space operas, and better yet, both together, then I'd recommend it, and I can understand why Reynolds is a favorite with some fans. He tells the kind of stories Asimov and Clarke did, with an updated 21st century viewpoint. But he also suffers from some of their deficiencies: too much science, not enough fiction, characters who are just there to carry the plot, and a style that will probably be dated and "old school" in another generation.

Six million years ago, at the very dawn of the starfaring era, Abigail Gentian fractured herself into a thousand male and female clones: the shatterlings. Sent out into the galaxy, these shatterlings have stood aloof as they document the rise and fall of countless human empires. They meet every two hundred thousand years, to exchange news and memories of their travels with their siblings. Campion and Purslane are not only late for their thirty-second reunion, but they have brought along an amnesiac golden robot for a guest. But the wayward shatterlings get more than the scolding they expect: they face the discovery that someone has a very serious grudge against the Gentian line, and there is a very real possibility of traitors in their midst. The surviving shatterlings have to dodge exotic weapons while they regroup to try to solve the mystery of who is persecuting them, and why - before their ancient line is wiped out of existence, for ever.

Verdict: An epic scale and an engaging plot, marred only by slightly lackluster characters. If you like this kind of hard SF, you should enjoy the book.
Collapse