I gave up on Libre Office, and bought a Microsoft Office subscription. Word is much better at layouts, though still kind of a pain. But it's starting to look pretty. 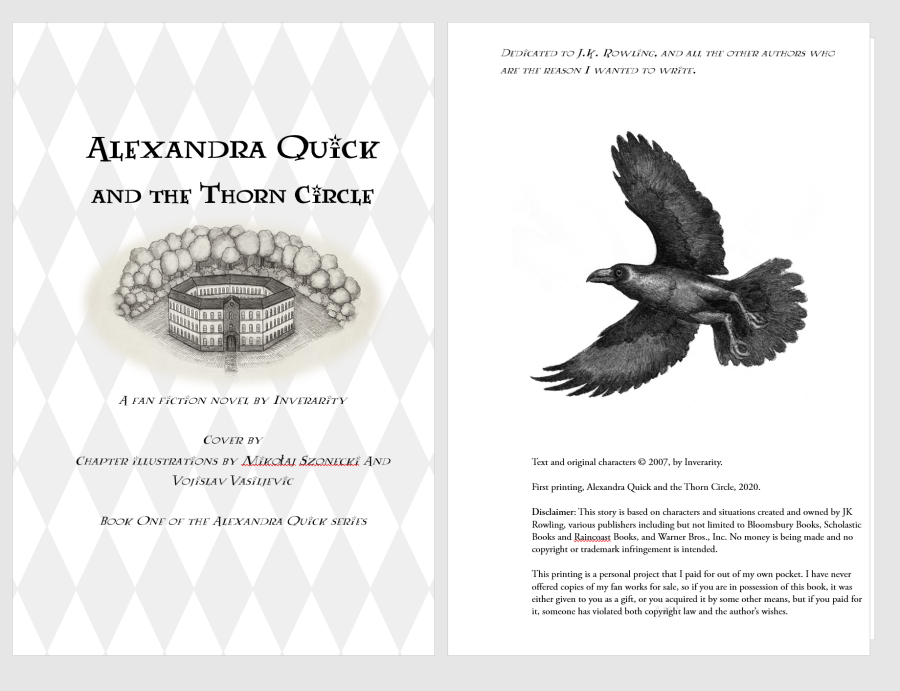 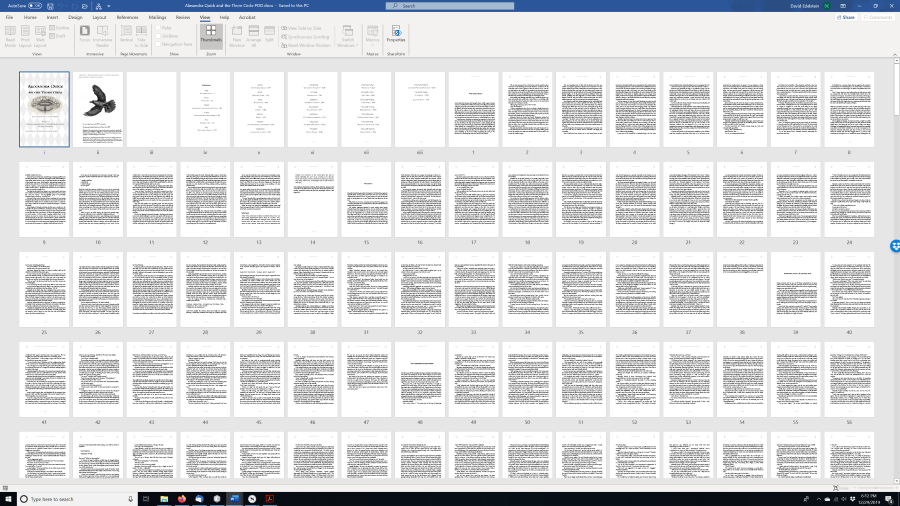 You can skip the rest unless you care about desktop publishing geekery...

In Which I Rant About Fonts and Shit

I can see why desktop publishing is for pros. It took me days just to get it to this level. What you probably can't see in the thumbnails is that I am making an effort to lay out the manuscript to look as similar as possible to the Harry Potter paperbacks. That means, for example, that even pages have the chapter number in the header, but odd pages have the chapter name, except that the first page of a chapter always has the chapter number, but does not have the little

in the right and left header margins.

That may sound like just a handful of fiddly details, but it turns out that getting all those details just right is not easy. Sure, Word has automatic page numbering and "Insert Chapter Number" features and so on, but to actually format it the way you want instead of with default settings (which are always wrong) requires researching all kinds of obscure little options buried three menu levels deep, inserting auto-updating fields and hidden text, etc. I am becoming an expert (okay, a journeyman apprentice) on the finer points of section breaks and positioning and text wrapping and Tables of Contents and style galleries.

True Type Fonts vs. Open Type Fonts (never mind all the other font types out there) do not behave the same way when you are trying to export a Word file to a PDF. Why do I need a PDF? Because most self-publishing sites that let you run off print copies of a manuscript will take either format, but if you upload the Word .docx file, all those auto-updating fields do not work in the generated proof, and you wind up with all your chapter headers saying "Chapter Zero." So, you need to export to a PDF, except it turns out that Word's built-in PDF export function sucks and won't properly embed OTF fonts (even if you paid for them - yes, I am actually buying fonts for this project - and your system says they are embeddable) because apparently Microsoft said "Fuck you, Adobe." So you need Adobe Acrobat, which very nicely plugs into MS Word and adds its own "Export to Adobe PDF" feature which does embed fonts properly.

I got a trial version of Adobe Acrobat, and found that all my fonts are now embedding most of the time, except when they don't, and it is not always clear why a font will sometimes be correctly embedded in the PDF and sometimes not. Of course, Adobe Acrobat is another $14/month, which is pretty pricy just to be able to properly export a Word document to a PDF. I'll probably just get all my manuscripts right in Word, including art, and then buy a subscription long enough to generate all the PDFs. Sigh.

So anyway, those fonts. Man, you can get lost in a rabbithole of font collecting. There are thousands of free fonts out there, but all the best ones cost money. Now, to really look like Harry Potter books, you need to buy quite a few fonts. Tatesha's Authentic Harry Potter Fonts is an invaluable resource. She actually tracked down (almost) all of the fonts actually used in every Harry Potter book. Fortunately, my Adobe subscription already gives me access to Adobe Garamond Pro, which is the font used for most of the text in the books. For headers and footers, right now I am using the Lumos font which is a freeware approximation of the Able font that was made famous by the Harry Potter books. I'll probably end up buying Able.

But, then I have to make decisions about fonts that don't correspond neatly to the HP books. For example, in AQATTC, what font should I use for Ben Journey's handwriting, and Abraham Thorn's? (Currently: Hoffmanhand and Bilbo Swash Caps, respectively.)

If there are any designers or font gurus out there, I welcome suggestions.

Now, to really look like a Harry Potter book, I need art. And not my crappy Poser art.

Fun fact: there are a total of 199 chapters in all seven Harry Potter books. Mary GrandPré illustrated every one, plus the covers. 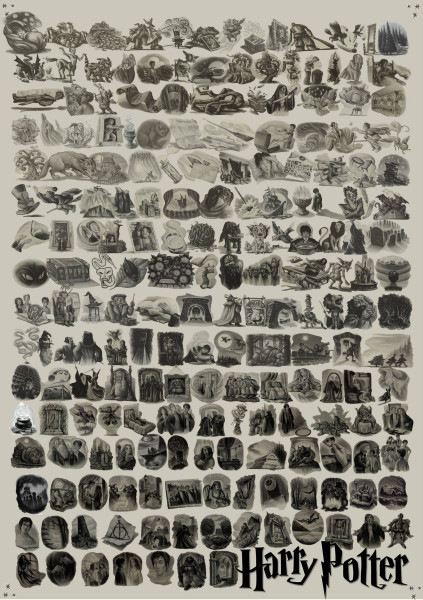 I'm up to 195 chapters, total, in the first five AQ books. I've already reached out to a few artists for pricing, and while I've found some very talented folks for a reasonable price, if I actually do this, well, let's just say I'll be paying more for this silly little vanity project than most self-published authors do for books they are actually trying to sell.

Naturally, of the artists I'm currently evaluating, the one I like best is the most expensive, while I could get "almost as good" for significantly less. Obviously, I am not commissioning someone for 200 sketches all at once, but I have made it clear that if things work out, I could end up commissioning this person for a long time to come, because ideally I'd like a consistent style in every book. So I am still on the search for my own Mary GrandPré.

If you are the sort who is actually interested in numbers: I've gotten quotes ranging from $10 to $80 per sketch. Which is dirt cheap even at the upper end, but do the math on 200+... And that's without even talking about full color cover illustrations. Surprisingly enough, the guy offering $10/sketch was far from the least talented, but unfortunately the style wasn't quite right. As for actually printing books, a 6x9 trade paperback on a self-publishing site will cost somewhere between $9-$14 per copy for a small print run, plus shipping. So no matter how I try to economize, I am going to be paying a stupid amount of money for a vanity project.

Please don't misunderstand my talking about money - I just thought people might be interested in figures if they ever contemplate doing something similar themselves. I cannot and will not accept any contributions, nor offer any copies for sale.

Okay, all this layout and design work is cutting into my writing time. Back to Book Six....

Posts from This Journal “writing” Tag