Book Review: In Harm's Way: The Sinking of the USS Indianapolis, by Doug Stanton

A timely novel about the last wartime disaster for the U.S. Navy. 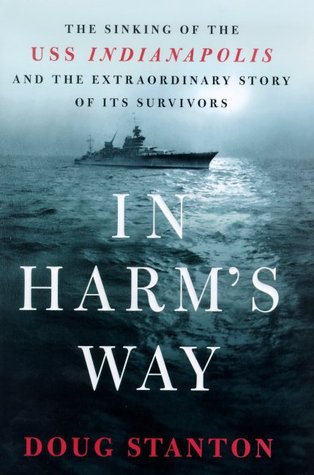 A harrowing, adrenaline-charged account of America's worst naval disaster - and of the heroism of the men who, against all odds, survived.

On July 30, 1945, the USS Indianapolis was torpedoed in the South Pacific by a Japanese submarine. An estimated 300 men were killed upon impact; close to 900 sailors were cast into the Pacific Ocean, where they remained undetected by the navy for nearly four days and nights. Battered by a savage sea, they struggled to stay alive, fighting off sharks, hypothermia, and dementia. By the time rescue arrived, all but 317 men had died.

The captain's subsequent court-martial left many questions unanswered: How did the navy fail to realize the Indianapolis was missing? Why was the cruiser traveling unescorted in enemy waters? And, perhaps most amazing of all, how did these 317 men manage to survive?

Interweaving the stories of three survivors - the captain, the ship's doctor, and a young marine - journalist Doug Stanton has brought this astonishing human drama to life in a narrative that is at once immediate and timeless. The definitive account of a little-known chapter in World War II history, In Harm's Way is destined to become a classic tale of war, survival, and extraordinary courage.

We've located wreckage of USS Indianapolis in Philippine Sea at 5500m below the sea. '35' on hull 1st confirmation: https://t.co/V29TLj1Ba4 pic.twitter.com/y5S7AU6OEl

I happened to read this book several weeks before Microsoft co-founder Paul Allen Tweeted that his team had, at long last, discovered the remains of the USS Indianapolis.

Most people today, if they remember the Indianapolis at all, remember it from the movie Jaws, when Robert Shaw tells Roy Scheider about the disaster.

This dramatic monologue was based on actual events, but it should be noted that some of the details in Shaw's speech are historically inaccurate. The Indianapolis did send a distress signal when it was hit, and its failure to arrive was noticed - just not by the right people. The reasons why its crew was left in the water for days make up the second part of the tragedy that began when the Japanese submarine I-58 sank it in the Philippine Sea.

In Harm's Way is a World War II story and a survival epic. Like Endurance: Shackleton's Incredible Voyage, it will horrify you and leave you in awe that anyone could survive such a thing.

The cruiser USS Indianapolis was once the flagship of President Roosevelt, but by the end of World War II, it had been mostly surpassed by newer, sexier cruisers. In July of 1945, it was given a secret mission — unknown to the crew, or even the captain, it was delivering Little Boy, the first atomic bomb, to the island of Tinian. After completing its mission, the Indy set off for the Philippines, where it was intended to join the fleet that would be launching the expected invasion of Japan. She never arrived.

A Japanese submarine captain scored his very first kill that night, and sank the Indy. What happened next was a harrowing four-day survival story followed by questions and recriminations and blame that were not fully settled until over 50 years later.

About a third of the crew died in the initial blast, or in the fires that swept the ship as it continued plowing, crippled, through the Pacific. Those who survived to abandon ship had worse ahead of them.

There weren't enough life vests or rafts. Many of the men were forced to float adrift without cover or support. They banded together in human chains, and helped each other keep their heads above water, but for the majority of them, it was four days of floating in the open ocean without food or water. Even the few who did make it to a raft had very little in the way of supplies.

And then there were the sharks.

The ocean was full of tiger sharks, makos, and hammerheads. They saw the hundreds of men floating on the surface as a buffet. This wasn't a random attack here or there, like most shark attacks — the attacks, as author Doug Stanton describes them, relayed to him by survivors, were the stuff of horror movies. Men lifted out of the water and carried away in the jaws of a huge shark. Men waking up next a companion floating next to him, only to realize that the lower half of his body was gone, eaten during the night. Sixty men were taken at once in one feeding frenzy.

The sharks mostly attacked at night, then left during the day, only to return in force the next night. But even during the day there were always sharks around, picking off survivors here and there.

Stanton, who researched the story of the Indianapolis, talked to survivors (an ever decreasing number) who held a reunion decades later. He went through declassified naval documents, and tried to give as complete an account as possible.

One of the reasons for the terrible disaster was a tragic series of errors and miscommunications. When the Indianapolis was sunk, they tried to get off a radio message — and unknown to them, their message was sent. But the low-ranking radioman who received it and delivered it personally to a sleeping commander was brushed off. The message was ignored.

This was not quite as shocking as it may seem. Late in the war, the Japanese made a habit of sending fake distress calls and other tricks on the radio, trying to mislead or confuse the Americans. But nonetheless, despite not arriving on schedule, it took several days for the US Navy to realize that the Indianapolis was missing. By the time they finally sent out search and rescue ships, the survivors had been on the water for four days. Many of them died during that time. Some died with their rescue ships in sight.

Captain McVay, the Captain of the Indianapolis, was the first naval officer in US history to be court martialed for losing his ship in an act of war. Although all of the survivors agreed that what happened was not McVay's fault, the Navy had apparently decided, in the wake of this disaster that got a lot of press at the time, that the captain would be a scapegoat. The charge against him was basically that by failing to "zigzag" he had endangered the ship and caused its sinking.

Ironically, Mochitsura Hashimoto, the captain of the submarine that sank the Indianapolis, was brought to Washington to testify for the prosecution, and instead told the court that even if McVay had put his ship on a zigzag course, it would have made no difference — he'd still have been able to sink it. Nonetheless, McVay was convicted, and his naval career was more or less dead-ended.

Years later, in 1968, haunted by the boys who'd died under his command, and by the occasional hate mail from their families that he still received, he committed suicide.

Many details of the Indianapolis's sinking were not declassified until 1959, and some details weren't released to the public until the 1990s. It was not until 2000 that the survivors of the Indianapolis got Congress to clear McVay's name and exonerate him. Commander Hashimoto, who had become a Shinto priest, sent a letter in support.


In Harm's Way is a great book if you like true-life survival stories and histories. The most enthralling chapters, of course, are the gruesome days after the sinking, in which Stanton describes the survivors' trials — starvation, dehydration, shark attacks, drowning, some men still suffering third degree burns, their skin peeling away after days of exposure to sun and saltwater, men going mad and attacking each other, or drinking saltwater.

The subsequent chapters are about the Navy's reaction to the disaster, and McVay's court martial. All of it is really interesting and I'm surprised this has never been given a Hollywood treatment. That may be largely because even into the 1990s, the Navy considered it a black mark on the service and didn't want to disclose all the details of how the Indianapolis was sunk and then lost most of her crew. But with the recent surge of World War II movies, and with the Navy cooperating with Paul Allen's effort to find the wreck, perhaps someone will finally give the Indy her due.