The "Poker Princess's" tell-all book about running high-stakes games with celebrities and billionaires. 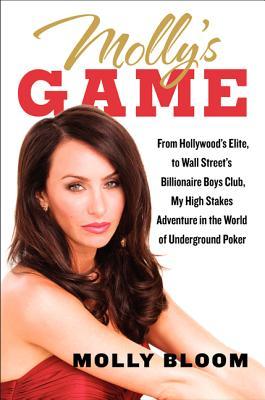 Molly Bloom reveals how she built one of the most exclusive, high-stakes underground poker games in the world - an insider's story of excess and danger, glamour and greed.

In the late 2000s, Molly Bloom, a twenty something petite brunette from Loveland Colorado, ran the highest stakes, most exclusive poker game Hollywood had ever seen - she was its mistress, its lion tamer, its agent, and its oxygen. Everyone wanted in, few were invited to play.

Hundreds of millions of dollars were won and lost at her table. Molly's game became the game for those in the know - celebrities, business moguls, and millionaires. Molly staged her games in palatial suites with beautiful views and exquisite amenities. She flew privately, dined at exclusive restaurants, hobnobbed with the heads of Hollywood studios, was courted by handsome leading men, and was privy to the world's most delicious gossip, until it all came crashing down around her.

Molly's Game is a behind the scenes look at Molly's game, the life she created, the life she lost, and what she learned in the process.


The perfect sound track for this book (and review):

She was working as a waitress in a cocktail bar.

According to Molly Bloom's tell (almost) all memoir, she moved to Los Angeles from Colorado, seeking fame and glory, and was literally working as a waitress in a cocktail bar when she stumbled into a job as personal assistant to an abrasive guy named "Reardon." Reardon is one of the few people whom she does not explicitly identify in her book. A pitiless asshole of the sort who acts the villain in movies about Hollywood or Wall Street, Reardon has nebulous business dealings and connections to all sorts of rich and famous people. Most of his personal assistants don't last more than a few weeks, but Molly puts up with his abuse and bullying and somehow winds up as his protege. This leads to her running Reardon's private poker games, attended by Hollywood A-listers and billionaires.

At first working for tips alone (which could total tens of thousands of dollars a night in games where celebrities are dumping half a million dollars on the table), Molly climbs her way up, fights (and wins) a power struggle with her former boss over who runs the games, until she is the one controlling the exclusive invitee list and getting calls from big players in LA and New York. This ultimately proves to be her undoing — when she is merely collecting tips, her job is in a legal gray area, but basically safe. She even retains a lawyer who makes sure she is paying taxes on her earnings and otherwise staying clean legally. But as she became more ambitious, and greedier, as the actual organizer of the games she began collecting a "rake" (the house's share of all bets). This made her the operator of an illegal gambling enterprise. And that's how the book ends, with Bloom given the full FBI home-invasion treatment and then awaiting trial.

As a casual poker player myself (I do okay in small stakes games but have never tried to play more than recreationally), I sometimes wonder how I'd do against celebrity players. While a few, like Ben Affleck and Tobey Maguire, have reputations for being very skilled players, most of the big names known for playing poker probably aren't serious students of the game. You can see this when you sit down at tables with people who will make the most (statistically) ridiculous bets because they see poker as "gambling," and not a game of probabilities and long-term odds.

(Of course those people are really annoying when they get lucky and crack your aces with 9-4 offsuit "because it's my birthday hand! Hahahah!" Grr, DIAF, you donkey.)

WTF did you just call with?

Molly's Game is very interesting as a rags-to-riches-to-convicted-felon story of a former cocktail waitress, but it's not really very much about poker. Instead, it's really a glimpse at celebrity culture and the world of the 1%-ers at play, and also a story about Molly herself (who was never really a player, and I don't think her knowledge of the game extended beyond what she needed to run it). She portrays herself as an interesting and somewhat sympathetic character, yet rather lacking in self-awareness. She was exactly the sort of pretty, ambitious girl who heads to LA hoping to be discovered and willing to make compromises, and while her story didn't end as badly as some, she certainly succumbed to some of the dangers of that path.

One of the interesting things about her memoir is that she freely names names — big names. A few people she keeps obscured (like her original boss, the mysterious "Reardon"), but she talks openly about games involving Ben Affleck, Leonardo DiCaprio, Tobey Maguire, A-Rod, and numerous Hollywood executives and billionaires who also came to her games. Surprisingly enough, there really isn't a lot of "dirt" on any of them, since all she has to say is that they liked to play poker and play at being alpha males, as you'd expect.

Spider Man is kind of a dick.

The exception is Tobey Maguire, who really comes off as a dick in this book. According to Bloom, Tobey actually organized the games, using Bloom as his intermediary, for his own profit. His not-so-secret scheme was basically to go "whale fishing" — luring very rich, very bad players to his game using as attractions his buddies like Leonardo DiCaprio, whose buy-ins he was actually paying for. It worked very well for Maguire, who has actually won poker championships, but as Bloom tells it, Maguire was cheap, a bad tipper, a sore loser, and eventually he squeezed her out of the game because he resented the relatively small amount she was making to keep it running. While Bloom speaks flatteringly, or at least respectfully, about stars like Ben Affleck, Gabe Kaplan, and the Olsen twins, her book is full of anecdotes about Maguire's weird, controlling, assholeishness. The most notable is the night he tried to make her "bark like a seal" for her tip after a game. He is enraged when she refuses, and after this, he starts scheming to get rid of her.

All of that is interesting if you like celebrity gossip and poker stories, but I was also interested in Bloom's own development. She's never exactly bad, but it's clear that she went swimming with sharks, knowing what she was doing, and wanting to be involved in that world of money and glamour, but thinking she could somehow avoid becoming either a shark or shark-bait herself. The breakdown in her personal relationships, as she loses one rich boyfriend after another to her career ambitions, does not make her reconsider her life choices.

Eventually, having been essentially run out of Los Angeles (by Tobey Maguire, if her account of his behind the scenes machinations is true), Bloom succeeds in starting up in New York City, running games for super-rich Wall Street types on a level above even what she was running in LA. Suddenly she is collecting a rake from games with $250K buy-ins, and making millions.

This is the point where she runs into organized crime. What struck me was her naivete — did she really think she could run games like that in New York City and not attract the attention of the big boys? Apparently she did. Even after a couple of goons corner her and explain to her that she's just acquired some partners and how things are going to be, she thinks she can just say no thanks.

This works about as well as you'd expect, though she is saved from her own stupidity by a fortuitous major FBI operation that rounds up all the wise guys who were about to continue her education the following week. She flees back to Colorado, but in the aftermath of the FBI operation, her name gets dropped and eventually the FBI comes after her too.

Following the publication of this book, Bloom ended up getting a mere slap on the wrist, since her only role was basically to organize poker games. Although she was theoretically facing prison time, she got only probation and a $1000 fine. Of course, she'd also had all her previous proceeds confiscated, and now she's an unemployed ex-cocktail waitress with only a book to her credit.

My impression of Bloom, reading her own memoir, is that she was hungry for money and glory, but neither ruthless enough for that world nor scrupled enough to maintain boundaries. So it was no surprise that everything came crashing down. Still, the judge seemed to recognize that she wasn't a hardened criminal, and the entitled, super-rich men she was organizing games for would certainly never face any consequences.

I'll be interested to see if Bloom is actually able to parlay this into any sort of meaningful future. According to her post-publication interviews, her current angle is trying to get it turned into a movie or TV deal... naturally.