Book Review: The Casebook of Carnacki the Ghost Finder, by William Hope Hodgson 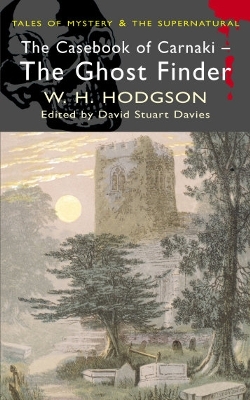 Wordsworth Editions, Ltd, 2006, 191 pages. Available for free on Project Gutenberg. (The Gutenberg edition is missing three stories — you can also find all of them here.)

Thomas Carnacki is a ghost finder, an Edwardian psychic detective, investigating a wide range of terrifying hauntings presented in the nine stories in this complete collection of his adventures. Encountering such spine-chilling phenomena as 'The Whistling Room', the life-threatening dangers of the phantom steed in 'The Horse of the Invisible' and the demons from the outside world in 'The Hog', Carnacki is constantly challenged by spiritual forces beyond our knowledge. To complicate matters, he encounters human skullduggery also. Armed with a camera, his Electric Pentacle and various ancient tomes on magic, Carnacki faces the various dangers his supernatural investigations present with great courage. These exciting and frightening stories have long been out of print. Now readers can thrill to them again in this new Wordsworth series.


William Hope Hodgson's Carnacki stories were published during the boom of detective fiction that followed the popularity of Sherlock Holmes. You can definitely see Hodgson copying the Holmes formula, and his stories are no improvement on Sir Arthur Conan Doyle's work. What makes Hodgson's occult detective stories worth reading even now is that you can see the bare elements of an occult cosmology that is reminiscent of the later work of such authors as H.P. Lovecraft.

This volume, which is not large, collects all of Hodgson's Carnacki stories, originally published in magazines between 1910 and 1912. Carnacki never develops much as a character: each story begins with Carnacki gathering four friends at his home, including the author (who is referred to in some of the stories as "Dodgson"). Carnacki then proceeds to narrate his latest case to them. There isn't any real interaction between them; they're just a faceless collection of names to serve as Carnacki's audience.

The cases are almost all haunted houses, or in the case of The Haunted Jarvee, a ship. Each time, someone will call in Carnacki because they're being terrorized by what they think is something supernatural, and Carnacki will meticulously investigate.

Many of the "hauntings" turn out to be Scooby Doo villains — a smuggling ring, an old man who wants to frighten people off an estate, a jealous suitor, etc. — using secret doors and primitive special effects to scare their victims. But sometimes Carnacki discovers that the culprit is actually supernatural.

'Tassoc!' I shouted, and my voice went empty-sounding round the great apartment; and then, in a flash, I knew that Tassoc had never called. I whirled round, sick with fear, towards the window, and as I did so, a frightful, exultant whistling scream burst through the Room. On my left the end wall had bellied-in towards me, in a pair of gargantuan lips, black and utterly monstrous, to within a yard of my face. I fumbled for a mad instant at my revolver; not for it, but myself, for the danger was a thousand times worse than death. And then, suddenly, the Unknown Last Line of the Saaamaaa Ritual was whispered quite audibly in the room. Instantly, the thing happened that I have known once before. There came a sense as of dust falling continually and monotonously, and I knew that my life hung uncertain and suspended for a flash, in a brief, reeling vertigo of unseeable things, Then that ended, and I knew that I might live. My soul and body blended again, and life and power came to me. I dashed furiously at the window, and hurled myself out head-foremost, for I can tell you that I had stopped being afraid of death. I crashed down on to the ladder, and slithered, grabbing and grabbing; and so came some way or other alive to the bottom. And there I sat in the soft, wet grass, with the moonlight all about me; and far above, through the broken window of the Room, there was a low whistling.

The stories which involve actual supernatural manifestations are more interesting than the Holmesian human perpetrators, because Carnacki isn't just dealing with ghosts; Hodgson had a cosmology sketched out including such things as "the Sigsand Manuscript" and "Saiitii Manifestations." In The Hog, Carnacki actually describes "Outer Monstrosities" from the depths of space.

While there is little exceptional about Hodgson's writing, the Carnacki stories are an interesting read, given where Hodgson sits historically and literarily between Sir Arthur Conan Doyle and H.P. Lovecraft. Carnacki's occult "defences" and "Electric Pentacle" and other invented arcana are imaginative, and Hodgson conjures up some genuinely dreadful hauntings, but after the first few, they're pretty repetitive. Had he written more, perhaps he'd have eventually expanded Carnacki's world.

Verdict: Florid Edwardian prose and formulaic stories that nonetheless show a raft of influences, and some really creepy creatures. Fans of Sherlock Holmes and/or Lovecraft, but especially fans of both, will probably enjoy them. 7/10.