Looking at my archive of AQ images, I am inspired by how many talented people have drawn fan art for my stories. And despite the long hiatus in my writing, people are still creating new fan works for me.

rikchik came up with a currency symbol for Confederation Lions. It is much cooler than what I envisioned (which was basically just a stylized "L" with a hash mark or something).

Sajirah tumblr drew a picture of an older Alex. 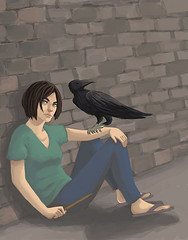 agogobell wrote a short story: Anna Chu and the World Away.

So what about your writing?

A few people suggested I try writing something else, and I did take a stab at that. I began a new (original fiction) novel, but did not get very far. I still like the idea very much, and will pursue it later, but I just don't think I do very well working on multiple projects at once.

In the keep-your-fingers crossed department, after finding little interest with agents for my SF novel, I sent it off to the few publishers that still accept unagented manuscripts and forgot about it. And about six months later, one publisher - a fairly well known one - informed me that my manuscript had been selected from the slush pile for "further consideration."

Eight months on, and I am still waiting to hear from them. This publisher is rather notoriously slow about such things, so I wouldn't be surprised if it's a year or two from now before I finally get a rejection or acceptance. I am not going to get my hopes too high - I was told by someone familiar with said publisher's slush pile that I am already about one in a thousand by getting this far, but the odds of actually getting all the way to a thumbs up and a publishing contract are still probably at least ten to one. But it's cool.

I am mustering my energies, gathering my resolve, making New Year's resolutions, and all that stuff. I have a number of things I need to do in the coming year, not the least of which is getting back to writing. I'm not making any more promises or giving ETAs, but I have taken a long enough hiatus, I am missing the writing, and with a little work on time management and reassignment of priorities, I would like to get back to it.

I'll keep you posted. And thanks, as always, for your patience, and for those of you who haven't given up on seeing the AQ series completed.
Collapse