An actor impersonates a politician and becomes an interplanetary leader. 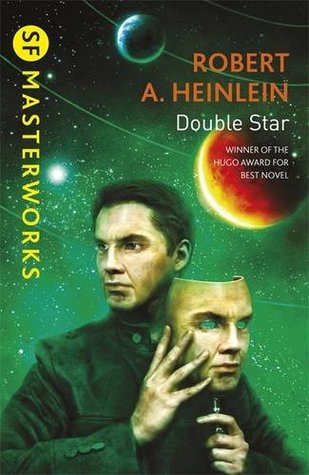 Every stand-in dreamed of the starring role - but what actor would risk his life for the chance?

One minute, down-and-out actor Lorenzo Smythe is, as usual, in a bar, drinking away his troubles while watching his career circle the drain. Then a space pilot buys him a drink, and the next thing Smythe knows, he's shanghaied to Mars. Smythe suddenly finds himself agreeing to the most difficult role of his career: impersonating an important politician who has been kidnapped. Peace with the Martians is at stake, and failure to pull off the act could result in interplanetary war.

Smythe knows nothing of the issues concerning free interplanetary trade and equal rights for aliens and cares even less, but the handsome compensation is impossible to refuse. He soon realizes, however, that he faces a lifetime masquerade if the real politician never shows up.

Verdict: Double Star is not Heinlein's most exciting or imaginative work, but it is a good showcase of his early style, and his talents as a writer, and is still entertaining today, less dated than some of his other early SF novels. 7/10.

Also by Robert A. Heinlein: My reviews of Have Space Suit, Will Travel, Starman Jones, I Will Fear No Evil, Farnham's Freehold, and Orphans of the Sky.