A memoir by someone raised within the Church of Scientology, and how she eventually Blew. 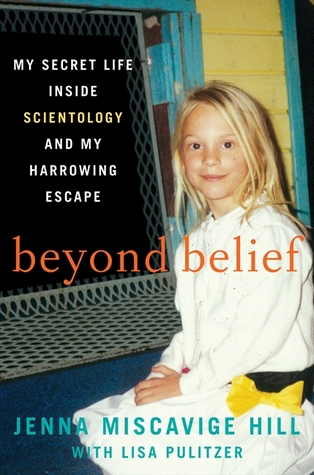 Jenna Miscavige Hill, niece of Church of Scientology leader David Miscavige, was raised as a Scientologist but left the controversial religion in 2005. In Beyond Belief, she shares her true story of life inside the upper ranks of the sect, details her experiences as a member Sea Org - the church's highest ministry - speaks of her "disconnection" from family outside of the organization, and tells the story of her ultimate escape.

In this tell-all memoir, Jenna Miscavige Hill, a prominent critic of Scientology who now helps others leave the organization, offers an insider's profile of the beliefs, rituals, and secrets of the religion that has captured the fascination of millions, including some of Hollywood's brightest stars such as Tom Cruise and John Travolta.

Verdict: Beyond Belief is an interesting inside look at a cult that still manages to exist, largely funded by rich celebrities like Tom Cruise. Jenna Miscavige Hill's story is not really very compelling beyond that inside look, but I'm glad she was able to tell it. For a more in-depth look at Scientology, I recommend Inside Scientology: The Story of America's Most Secretive Religion. 7/10.