From the Eastern Front to North Africa to a Russian labor camp: the memoirs of one of Rommel's officers. 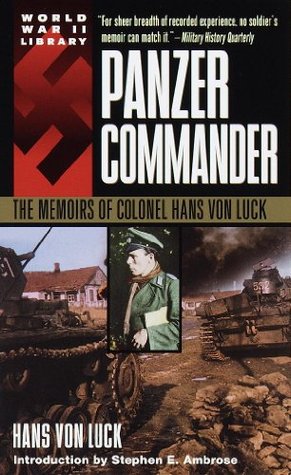 A stunning look at World War II from the other side.... From the turret of a German tank, Colonel Hans von Luck commanded Rommel's 7th and then 21st Panzer Division. El Alamein, Kasserine Pass, Poland, Belgium, Normandy on D-Day, the disastrous Russian front - von Luck fought there with some of the best soldiers in the world. German soldiers. Awarded the German Cross in Gold and the Knight's Cross, von Luck writes as an officer and a gentleman. Told with the vivid detail of an impassioned eyewitness, his rare and moving memoir has become a classic in the literature of World War II, a first-person chronicle of the glory - and the inevitable tragedy - of a superb soldier fighting Hitler's war.

Verdict: Panzer Commander was a good read, though not the best or most exciting war memoir I have read. While Von Luck is not exactly whitewashing his participation in the war on the side of the Axis, his account does seem a bit scrubbed. That said, it's always interesting to see into the mind of "the other side." This book is worth reading for anyone who is interested in WWII history, but blazing Panzer battles are actually not its strong point. 7/10.