Jilted by his childhood sweetheart, Florentino Ariza waits 50 years to proposition her again at her husband's funeral. 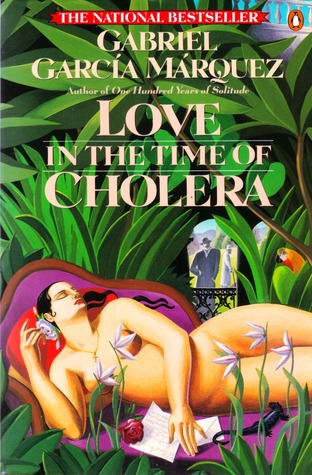 In their youth, Florentino Ariza and Fermina Daza fall passionately in love. When Fermina eventually chooses to marry a wealthy, well-born doctor, Florentino is devastated, but he is a romantic. As he rises in his business career he whiles away the years in 622 affairs--yet he reserves his heart for Fermina. Her husband dies at last, and Florentino purposefully attends the funeral. Fifty years, nine months, and four days after he first declared his love for Fermina, he will do so again.

Verdict: A sultry tale of obsessive love-in-waiting, carried along time's river which is represented by the literal river in the novel, Love in the Time of Cholera is less telenovela than the movie, and a masterpiece of language even in translation. I liked it much more for the prose than for the characters and the story, however, and while I can certainly appreciate Márquez's gifts as a writer, he isn't likely to become one of my favorites, at least not based on this work.

As an entry on the 1001 Books You Must Read Before You Die list, it probably deserves its place, though I have not read any of Márquez's other books and cannot say if this is the worthiest.