A billion-year-old alien bioweapon threatens the solar system; a UN politician, a space marine, and a privateer crew try to stop armageddon. 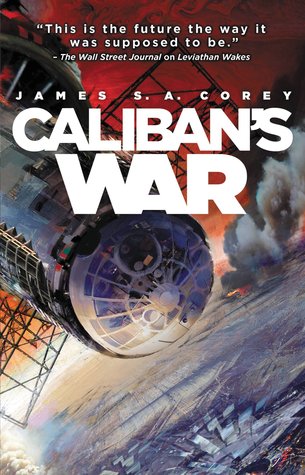 James S.A. Corey's best-selling hit Leviathan Wakes earned Hugo and Locus Award nominations. In Caliban's War, the second chapter of Corey's Expanse series, a desperate Earth politician works tirelessly to prevent war from reigniting. Meanwhile, upheaval takes root on Venus and Ganymede. And amidst this tumult, James Holden and his crew on the Rocinante are charged with the impossible task of saving humanity from a terrifying fate.

Verdict: Being often disappointed by space opera that is either tiresomely derivative or badly written, the Expanse series is now one of my favorites. Caliban's War isn't perfect, but it's pretty darn good, and has me on board for the next one. 8/10.

Also by James S.A. Corey: My review of Leviathan Wakes.

Only managed to write for a couple of hours this week, and that was mostly trying to work my way through the same plot complication I've been struggling with for the last two weeks. The scheme is full of plot holes and I haven't worked them out because I've been just trying to write through it with an idea of where I'm going but not how I will get there. That's not going to work for this particular twist - it needs to be worked out in a tightly planned fashion. Which means outlining. Hopefully will get around to that this week. Right now the idea in my head is kind of like "And then Alexandra does this, and then that happens, and then - WAVES HANDS/DEUX EX MACHINA/MAYBE THE READERS WON'T NOTICE - and everything goes as planned and she's in the next scene..."
Collapse