A first contact novel, starring a linguist, that does not suck. 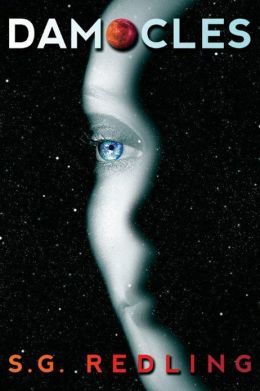 When Earth is rocked by evidence that extraterrestrials may have seeded human DNA throughout the universe, a one-way expedition into deep space is mounted to uncover the truth. What linguist Meg Dupris and her crewmates aboard the Earth ship Damocles discover on Didet - a planet bathed in the near-eternal daylight of seven suns - is a humanoid race with a different language, a different look, and a surprisingly similar society. But here, it's the "Earthers" who are the extraterrestrial invaders, and it's up to Meg - a woman haunted by tragedy and obsessed with the power of communication - to find the key to establishing trust between the natives and the newcomers. In Loul Pell, a young Dideto male thrust into the forefront of the historic event, Meg finds an unexpected kindred spirit, and undertakes an extraordinary journey of discovery, friendship, and life-altering knowledge. Told from both sides of a monumental encounter, Damocles is a compelling novel about man's first contact with an extraterrestrial race.

Verdict: A thoughtful, intelligent sci-fi novel that explores linguistics and alien cultures in a realistic way. Damocles is not a particularly exciting book, but it's a fine work of genuine speculative fiction. 7/10.

Now and then I talk about about my writing style, my technique, my efforts to improve my craft. It's not just because I'd like to be published someday, but this writing thing, even if it never becomes more than a hobby, is still something I'd like to be really good at.

I am pretty clearly a "storyteller." Most people who like my writing like the story and the characters. They like my plotting, and the consequences they see unfolding as I bring my plans to fruition.

My writing style, at best, is readable and technically proficient. Now and then I polish a sentence I particularly like, and I've managed a few nice bits of imagery, some description that I thought was particularly fine, but I don't have the wit, the finesse, the mastery of vocabulary, of some writers whom I particularly admire.

I don't know if this is a flaw or not. I mean, there's nothing wrong with writing clean prose that is pleasant to read and carries no particular signature style. Lots of writers write in this kind of plain-prose style. It's not like I aspire to be "literary."

Still, I do look wistfully at some real wordsmiths and wonder how their prose all comes out looking very much like something crafted.

So, I can't do that. I kind of wish I could, but I think it's a mistake for any writer to try to emulate another writer's style.

But I do, at least, have a knack for stories, and interesting characters. When I can put in the writing time. That's the other thing I envy: writers who can churn out thousands of words a day. A feat I haven't managed in... far too long.