Nazi supermen vs. British warlocks in a do-over to save the world. 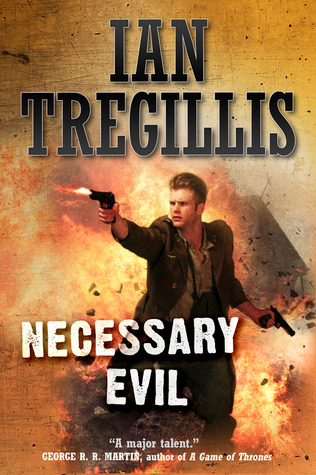 Raybould Marsh, one of "our" Britain's best spies, has travelled to another Earth in a desperate attempt to save at least one timeline from the Cthulhu-like monsters who have been observing our species from space and have already destroyed Marsh's timeline. In order to accomplish this, he must remove all traces of the supermen that were created by the Nazi war machine and caused the specters from outer space to notice our planet in the first place.

His biggest challenge is the mad seer Greta, one of the most powerful of the Nazi creations, who has sent a version of herself to this timeline to thwart Marsh. Why would she stand in his way? Because she has seen that in all the timelines she dies and she is determined to stop that from happening, even if it means destroying most of humanity in the process. And Marsh is the only man who can stop her.

Verdict: Necessary Evil brings the Milkweed trilogy to a finale, so definitely do not read it out of order. The ending suffers only from a bit of deja vu thanks to the events of the first book being replayed and altered, but it's a satisfying conclusion to a great series.

Also by Ian Tregillis: My reviews of Bitter Seeds and The Coldest War. 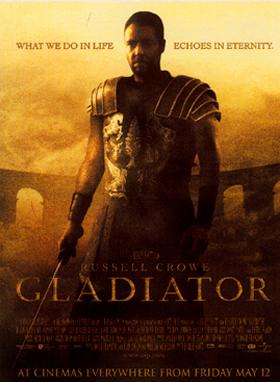 Would you believe I'd never actually seen this movie?

So, I finally Netflixed it, not expecting much in terms of historical accuracy. While the history is, obviously, Hollywoodized, Ridley Scott did create a grand Roman spectacle with admirable attention to detail. Hey, grand spectacle and battle scenes with a Hans Zimmer soundtrack? I don't know why I never watched it before.

But — guess which part annoyed the bayjeezus out of me? 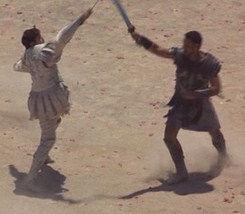 That's right — the Hollywood-Stupid part: "Hello, I am the fucking Emperor of Rome. I want to prove what a bad-ass I am, so I will stick my enemy with a knife so he's bleeding out, then put armor on him and give him a live blade so we can fight in an arena. He's already proven to be very hard to kill and one of the best gladiators ever, but I'm the fucking Emperor of Rome so how can my clever plan possibly go wrong?"

Yeah, other than that part, good movie.
Collapse