A one-liner cannot do justice to this long work of a lifetime, but it's damned fine reading and the most nuanced, character-focused epic you've ever read. 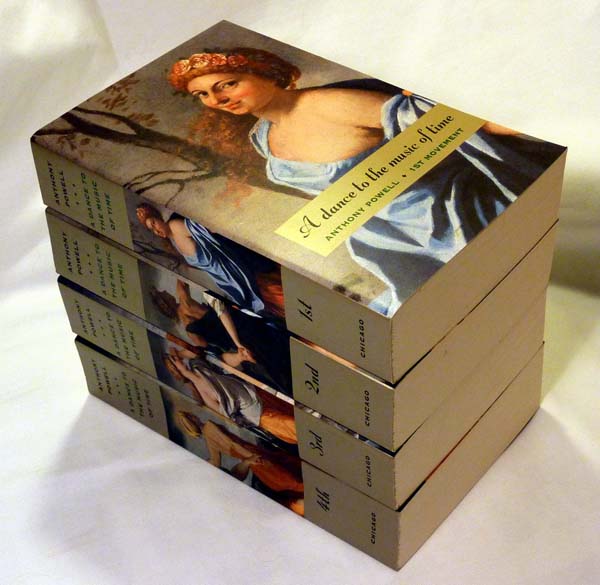 This twelve-volume sequence [A Dance to the Music of Time] traces a colorful group of English acquaintances across a span of many years from 1914 to 1971. The slowly developing narrative centers around life's poignant encounters between friends and lovers who later drift apart and yet keep reencountering each other over numerous unfolding decades as they move through the vicissitudes of marriage, work, aging, and ultimately death. Until the last three volumes, the next standard excitements of old-fashioned plots (What will happen next? Will x marry y? Will y murder z?) seem far less important than time's slow reshuffling of friends, acquaintances, and lovers in intricate human arabesques."

Continued from Part I.

Verdict: Holy shmoly. It took me all year to work through this ponderous British doorstopper. To summarize this series in a few words is easy, to convince you that you might actually want to read three thousand pages about a Limey swell spectating his way through the middle of the 20th century, not so much. Powell has been called the English Proust, and this was his magnum opus. Maybe that's more likely to make you run screaming. Okay, if you can read a gazillion Wheel of Time or Harry Dresden novels, you can read twelve books that are actually literary art. These books are not airport reads or bathroom reads or snatch a chapter here and there reads — they are books to immerse yourself in and luxuriate in and forget about worrying where the plot is going. There isn't much driving excitement between the pages, no suspense and few surprise twists, but I have never seen an author create and maintain characters with such mastery, or use prose with such delicacy, and Powell's ability to orchestrate over a hundred characters moving in and out of focus over the course of half a century is not something many other authors would even attempt.

Plus, these books totally inspired J.K. Rowling. Read them and tell me I'm wrong.

3000 pages of high-falutin' Lit'ra-chure that is way more impressive than reading War and Peace.

If anyone else has read this whopper, please, please comment, 'cause I don't think I've ever met anyone who has!

A Dance to the Music of Time is on the list of 1001 Books You Must Read Before You Die, and was my 2012 assignment for